It’s not hump day it’s Hay River.  Yes length of stay here was increased due to changing plans and road conditions.  This is ok though because we had an opportunity to experience a fish market, the Great Slave Lake beach, spent time at the visitor center and visited the museum.  Roy and I did drive to the town of Enterprise to see a Jamboree and then of course up and down roads looking for animals.

Hay River called the hub of the North https://en.wikipedia.org/wiki/Hay_River,_Northwest_Territories is the terminus for the Railroad from here on up it travels on barges to reach the surrounding communities on the lake. So it does have a port, and an airport.

I would say that it is a well rounded hard working town. We had just missed the train and some of the barges leaving that carried diesel fuel for the northern communities in the summer the barges transport enough fuel to keep all of the towns warm. This year might be a challenge as one of the railroad trestles had burned this summer and had just reopened.  The fact that the town lays on water they also have 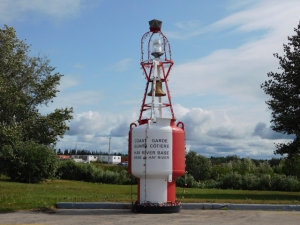 Everyone in town was so friendly and helpful that I could imagine me living here (ok if I was 20 years younger).  The visitor center told us the best place in town to have the local whitefish that come out of the lake is at Back Eddy, I can tell you they have real good ribs.  We got there and ready to order and was told no fish the fisherman was out of town.  The restaurant is on the second floor of a building with an elevator so Roy decided he would ride down in it.  I don’t think it had been used in awhile because the waitresses had to find the keys then figure out how to use it and see if it worked.  (BTW it was a little bigger then a closet).  It worked when they opened the door I told Roy he could ride down in the elevator I walked.  The funny part was we could hear them laughing all the way down.  So I still wasn’t going for a ride.

Another suggestion from the center was the fisherman market, Roy had it on the agenda. 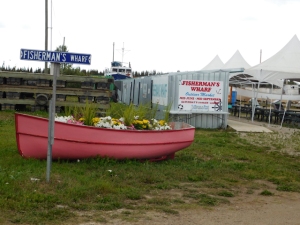 I did thanked them for the suggestion and let them think it was their idea. We did go back when it was going on Saturday.  I even got some homemade fudge exactly like my mom used to make reminded me of her and the holidays.  The market had a few food vendors selling breakfast which we ate before we came silly us.

A few crafters of yarn and soaps, a couple of veggie sellers, and the fudge lady who also made some homemade pies.  Roy and I enjoyed the lemon meringue pie. It is a meeting place for the whole community.

After the market we drove around the corner to visit the Hay River Heritage Center. 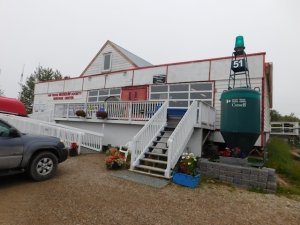 This is where I heard from a book of course the whooping crane call.  This is so I can recognize it in the wild.  The grounds featured an ice cream shop did not stop in as it was 60 too cold for ice cream.

A few old boats, plus an old fire truck.

The tanker cars in the background are not part of the museum but they do carry some of the diesel up to the north as I mentioned earlier.  In the Territories and I think through most of Canada there is much emphasis put on preserving the culture of the Indigenous People.

The part of this adventure I am enjoying is one place you go leads to another place to explore.  So we visited the public beach on our way to the jamboree in Enterprise.  Great Slave Lake https://en.wikipedia.org/wiki/Great_Slave_Lake has sandy beaches here in Hay River 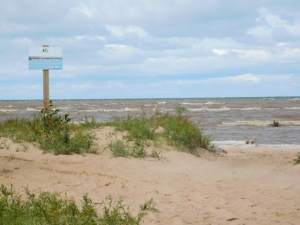 seeing the vastness of the lake is awe inspiring. I was told that the beaches on the other side of the lake near Yellowknife are rocky I’m looking forward to comparing the two.

So we decide to head to a jamboree sounds interesting I have noticed people still love to get together for any reason to enjoy music food and good times.

You also never know what you will see decorating a driveway when you go exploring. 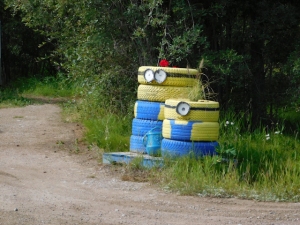 Please can someone show Roy where the Ketchup is he found the Muster sign.