Rough roads, hail, snow, fog, clouds, and rain the views were all worth it.  I think the best part of the drive were the views of the Mackenzie River Delta Each time we crested a hill we were greeted by vast expansive views.

The richness of the soil and the amount of water lends to the lush greenness, the white you see is the waves of cottonweed.  these really look like huge q-tips.  Traveling the ITH you never know what you see coming around a corner.  The thing that we kept seeing was the numerous abandoned snowmobiles.  They are just sitting out in a field or by a side road.  Some of them have been there quite a while.  You have to wonder the story behind the vehicles like this one 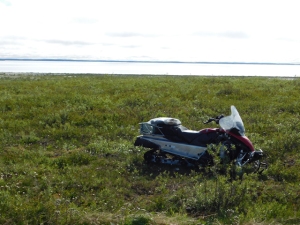 .  Some of the snowmobiles had pallets leaning up against them others had sleds attached to them.  Roy kept mentioning he was surprised that the vehicles were left alone, I was surprised at how many there were.  I was impressed with the winding of the road and how it hugged the water, no animals though.  As we were pulling into Tuk there is the Parks Canada Pingo National Landmark.  The area contains 8 pingos. Ibyuk Pingo is the tallest one in Canada and the second highest the tallest Pingo is in Alaska.  You can actually paddle out to the pingos it is only a 45 minute paddle.  Maybe next time.

The morning we left Inuvik for Dawson we got a small break in the weather. Cloudy but not a lot of rain.  In fact here are a few pictures of the views going towards Eagle Plains.  We left on Saturday the 29th headed to Eagle Plains.  We were lucky enough to peak in and out of clouds and weather for some vista pictures.  Side thought here I’m glad we could see more of the landscape traveling south on the Dempster because of perspective and what sid 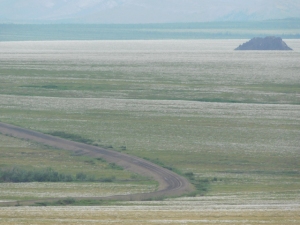 e the rolling landscapes were on. You can also see the road that we were headed on a few minutes later.  The white you see is the cottonweed.  The r 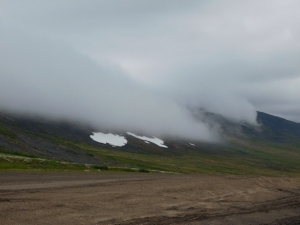 oad itself looks wet and it was. 🙂  This picture shows how close to the road the clouds were at one point.  We kept driving in and out of the clouds all the way to Eagle Plains.  I thought it was cool watching the clouds engulf us then we would suddenly be out of the clouds. The funny thing about pictures and promises they can almost not happen.  I know I said I would get pictures of the Northwest Territories (NWT) sign, as we approached the clouds just engulfed the signs.  Have no fear Roy came through. 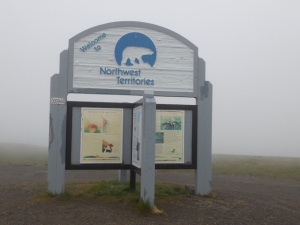 I think the pictures look great in the clouds.

We also were able to travel the Richardson Mountains https://www.britannica.com/place/Richardson-Mountains 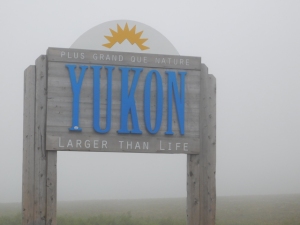 which are believed to be the Northern most point of the Rockies.  Speaking of the rockies we crossed the divide 3 times.  Water was flowing into the Artic ocean and the Bering sea.  I had a hard time watch water flow basically north.

We made it to the halfway point Eagle Plains

just before the weather turned super bad for the night including a little bit of hail.  I am pretty sure we were one of the last cars through before they closed the road. The RV park here only has 6 spots with electricity we were too late to snag one of these.  The good thing is we did get a spot. It was still closed in the morning.  If we ever travel together let us bring up the rear or you could easily get stuck somewhere without the group.  It looked a little messy heading from Eagle Plains to Dawson but we had to push on.

One point in the drive we were almost above the clouds with the sun out.  The clouds were so thick we almost missed our fox and the Ogilvie Ridge turn out. This is a picture of the pullout on the drive up the Dempster. 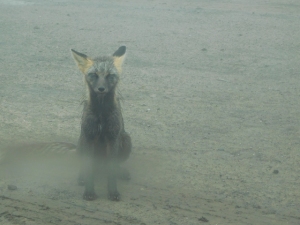 This fox has been fed before he was almost begging for food.  In fact the trash cans were overflowing and when we pulled in he had already been feasting on the trash.  I wish people would think before they do.  He kept coming by and sitting down looking like PLEASEEEEEEEEEE!! The fox did finally leave when more people pulled in.  He was pretty scruffy because he was wet.

After we passed this turn out it did start to clear up, the weather up here is very strange.  I am glad that it cleared up so I could grab a picture of how red orange the rocks are near Red Creek and Sulphur Springs.  The one warning I can give you is do not drink the water.  As water travels through limestone it picks up parts of the rock and breaks it down.  The color is a result of the high levels of calcuim, magnesium, sulfate and chlorine.  This colorization 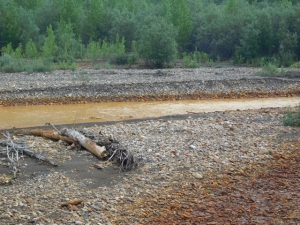 occurs for 25 kilometers here is just one picture. It looks like it is mud but that is actually a burnt orange color.  It is mentioned that you will sometime smell sulfer I did not.

We headed down the Dempster to the junction.  I was thankful for the fact that we were back on pavement.  The dirt on the car and hitch were not nearly as dirty as it was on the way up to Inuvik, but I have a feeling I will be finding and cleaning Dempster dirt for a while. 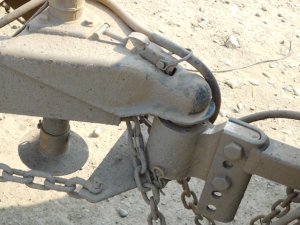 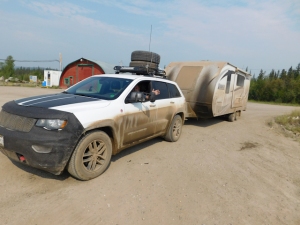 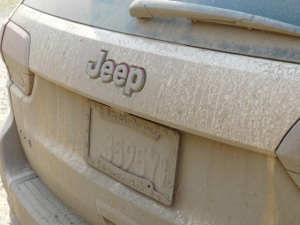 One thought on “All About the View”