We didn’t get a chance to do the Dalton or spend time in Chena Hot Springs or even boondock in Manley Hot Springs we did take some interesting day trips around the area. I have seen Ospreys, log cabins, native crafts, Sand Hill Cranes, baseball games and pipelines.

I did get the opportunity to watch an osprey bring a fish to it’s mate and then the mate bringing the fish home to the nest. https://en.wikiped 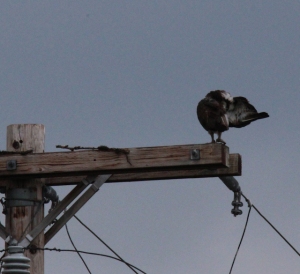 ia.org/wiki/Osprey We came back a second time to get these pictures.

It was also amazing to see the interactions between both adult birds.  The one who brought the fish in also took the remainder of the fish with it when it left.  We noticed the nest on our first drive up the Steese so of course I had to come back to see if I could get more pictures, the cool thing is I did.  The second trip up was rainy and there was a bike race going on, so more traffic then normal.  Like a good mom she did keep her chick as dry as possible during the downpour. M 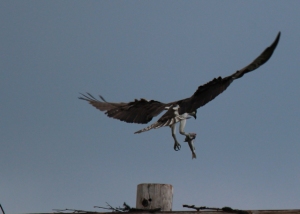 ost of the pictures are from behind as I thought I could get closer with my camera on the other side of the nest.  It was about this time that the second bird decided to fly in with a fish.  Watching the osprey feeding the chick was impressive. 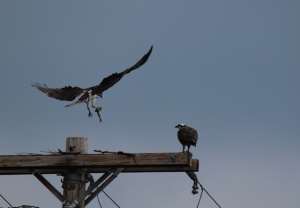 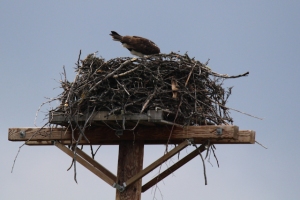 On the way up to the nest Roy found a dirt road.  It did have a sign F.E. Corp Gold Camp it was closed but we drove up to check it out anyway.  It loo 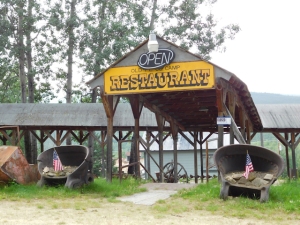 ks like it might be opening soon a lot of remodeling there was some old mining equipment on the grounds check it out. 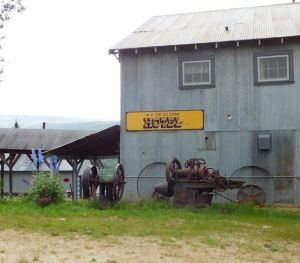 It’s funny what you can find on a dirt road.  I need to be more trusting when Roy takes those dirt and gravel roads. 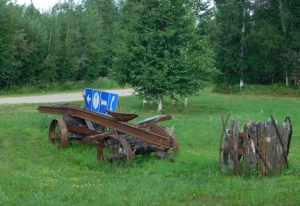 Heading up to the Steese we stopped by the pipeline. Which in itself is an amazing engineering feat. 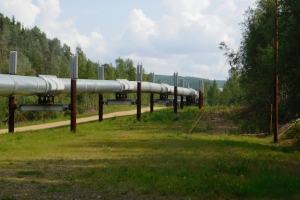 https://en.wikipedia.org/wiki/Trans-Alaska_Pipeline_System I look extremely small next to the pipeline.  There is a 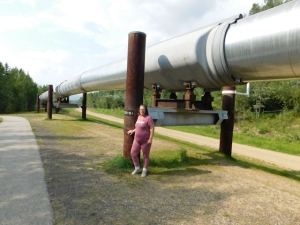 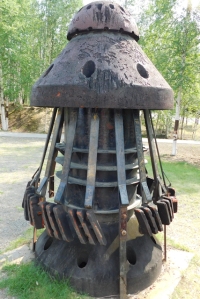 the pipeline and keeps it clean.https://en.wikipedia.org/wiki/Pigging 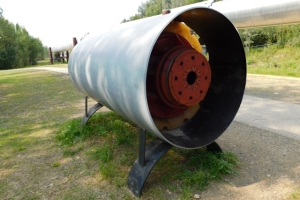 Another  thing is the stickers people have put on the warning sign that tells people not to climb on it the pipeline. 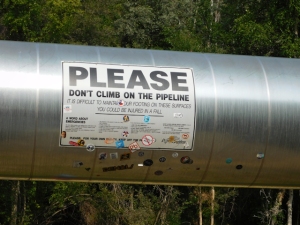 I also did not know some of the facts on the information board, the pipeline has 12 pumping stations and is 800 miles long just to name two facts.

We drove around Fairbanks and found ourselves at the train depot.  The train was not in but I was able to get photos of the depot. 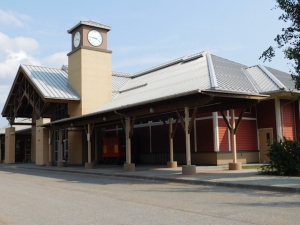 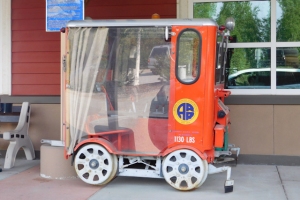 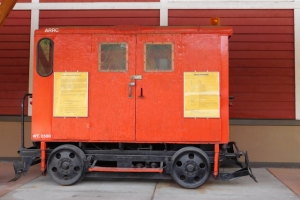 We also had time to visit North Pole Alaska and Nenana Alaska while we were here too. Pictures are on the way.

One thought on “Day Tripping”